Two bullets for Charlie Cumbley takes him into the lead after the second day at the 2018 OK Dinghy European Championship in Bandol, France. Fredrik Lööf, from Sweden, is up to second with Stefan Myralf, from Denmark, up to third after a stellar day on the water.

After several days of strong winds there was almost audible relief at the prospect of light winds on the second day of the championship. However the fleet of 77 sailors were made to wait again, this time for the wind to build. Shortly after 12.00 the fleet were released from the beautiful sandy beach to the warm blue waters of the Mediterranean. The wind built to 8-9 knots from the south-west, but remained very shifty with patches of pressure all over the course. 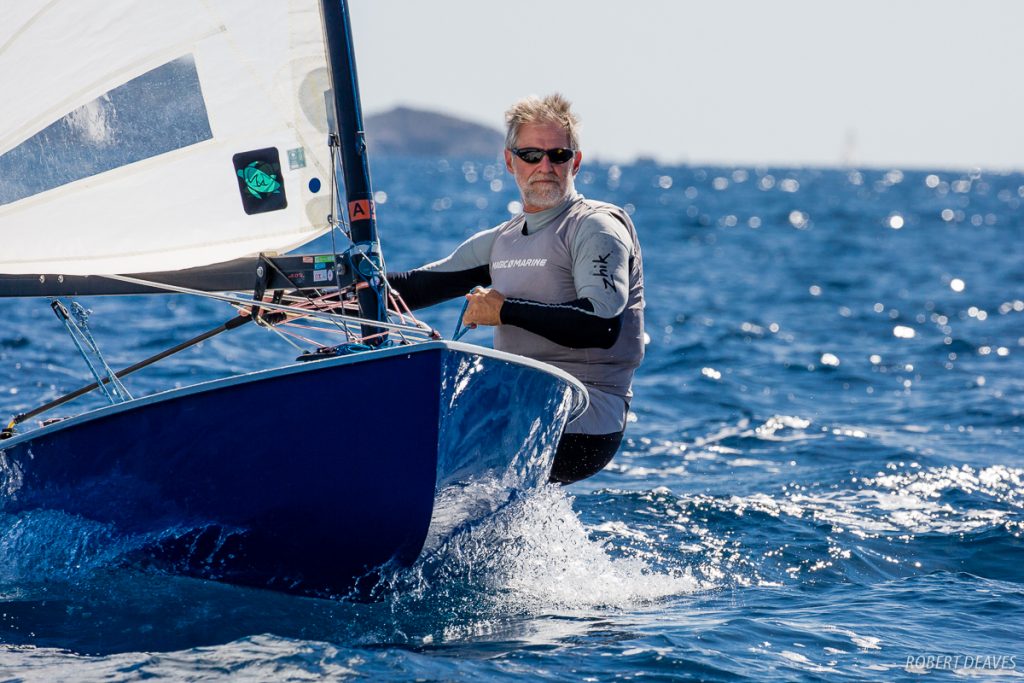 The current also caught out many sailors, and not just once, while the light winds and shifty conditions meant there was a huge spread on the fleet.

The lead ‘wafted’ from left to right on the first upwind of Race 3 of the championship, with each side looking good at times, but Chris Turner, from Britain, rounded with a nice lead from Cumbley and Pawel Pawlaczyk, from Poland. The reaches were long and slow and Cumbley gained by going higher on the second reach to pass Turner and lead the fleet. It was quite close behind him but he held on down the run up the final beat to take his first win of the day. Turner crossed second with Myralf sailing very well to cross third. 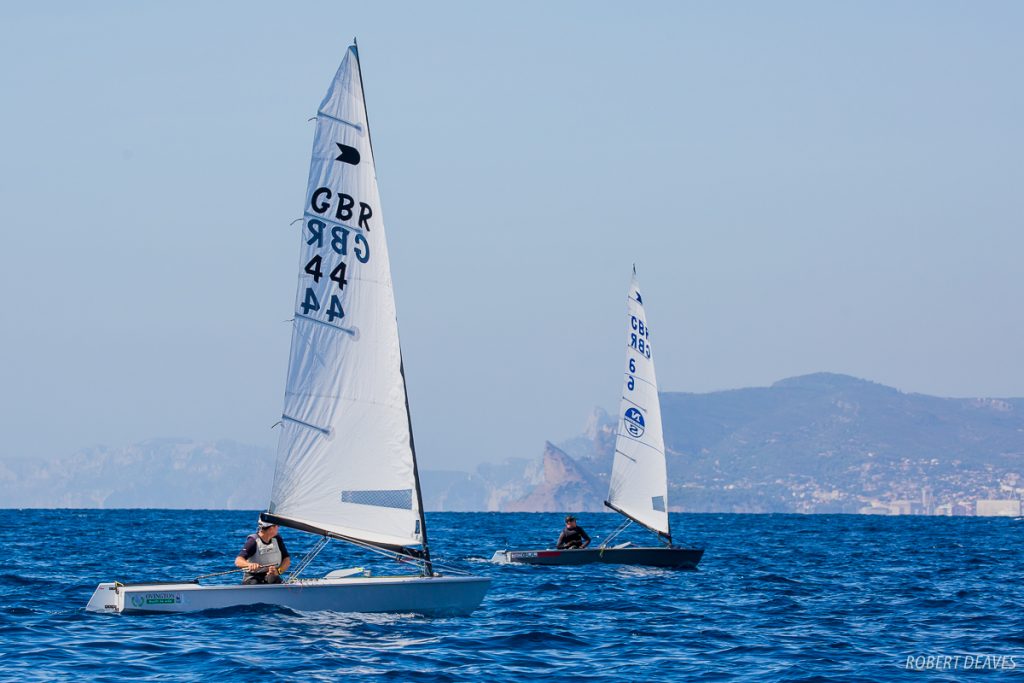 Race 4 got away under a black flag with most of the leaders tacking to the right. However the pressure was trying to go left and again there were some tough calls to be made. Myralf made the best of it to round first from Bo Petersen, from Denmark and Lööf. The left side continued to roll the dice on the second beat with Turner taking the lead from Myralf, but only by a few boatlengths, while Cumbley was up to third. It all changed again on the final upwind with Cumbley managing the split in the fleet well and keeping both sides in check, to cross first. Meanwhile, Petersen found the left to his liking to move back up and cross second while Anders Anderson, from Denmark, who had managed to recover from a windward capsize at the first top mark, crossed in third.

Cumbley explained his day. “We had two delightful races in a light sea breeze. It was quite tricky because a bit of pressure would come in, and it was quite pressure dependent. ‘Wafting’ would be my description of the day. We had two races in some fairly interesting conditions. You just had to make sure you were in the pressure and that’s what I headed for, and I probably had my best day ever sailing an OK.” 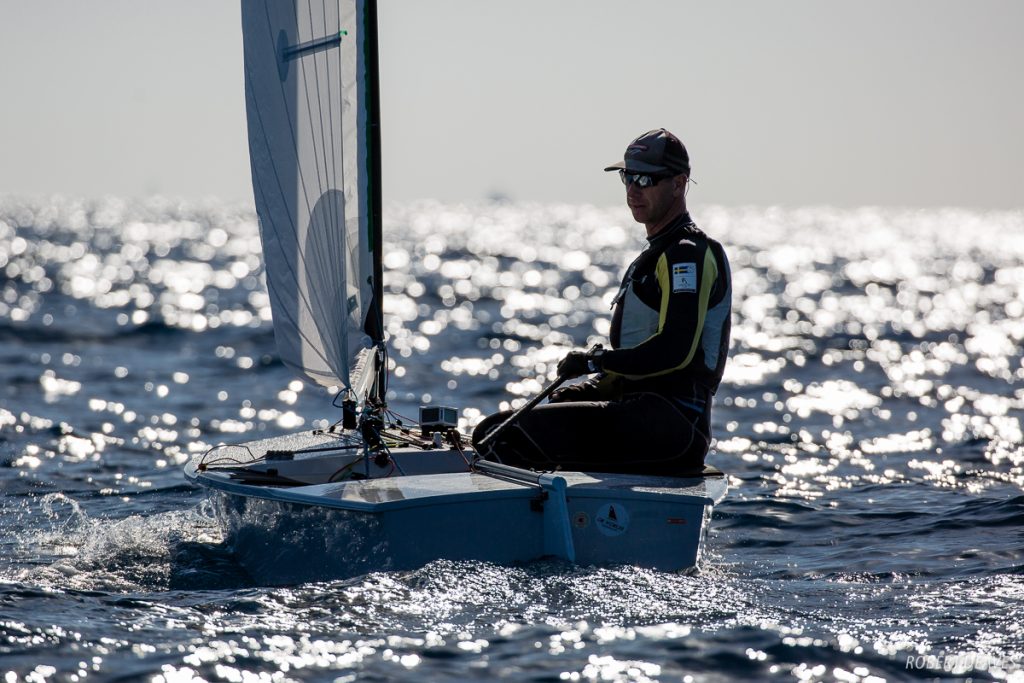 “In the first race Chris Turner was on fire upwind and I got past him and led round the rest which was very nice, but it was tricky because there were boats coming out both sides and there was a bit of managing expectations where you needed to be. And the second race was almost more pleasing because I had a pretty average start, but I ground my way out, got a lane and rounded the top mark about sixth and then got past a few boats here and there.”

He is quite enamoured with Bandol as a sailing venue. “As soon as I came round the corner with my trailer I looked out here and thought, this is nice. It’s a beautiful part of the world and it’s actually really nice to sail in these conditions: a light sea breeze, warm, and we have 70 odd boats here so it is great competition. So it’s brilliant. Can’t fault it.”\ 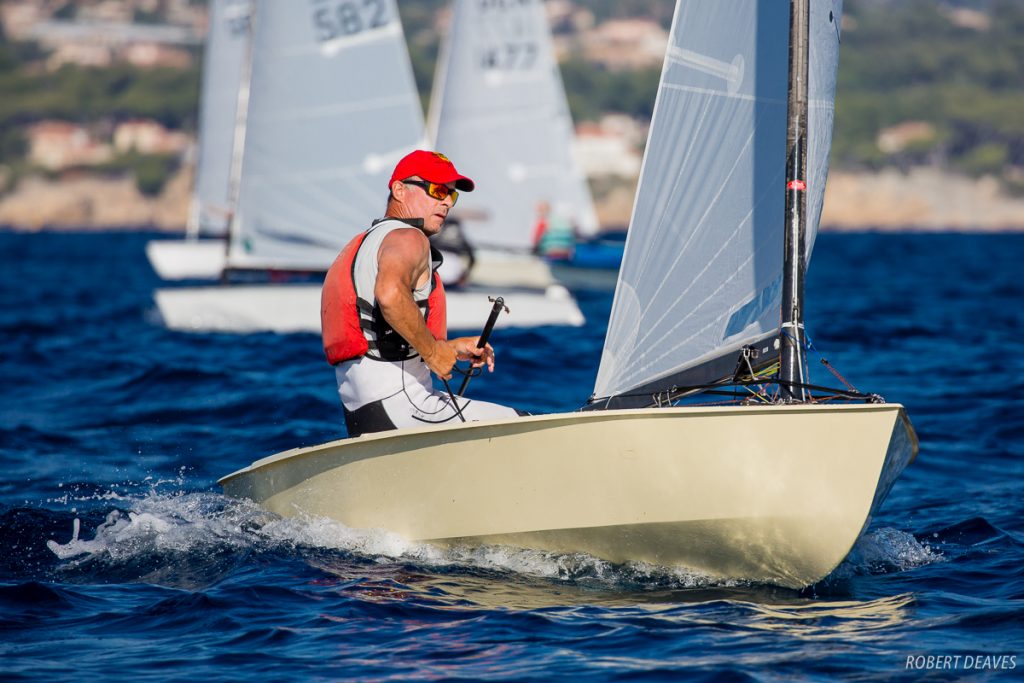 Myralf is back in the boat after a few years out of the class. “I have been away from the OK for a couple of years, sailing the Star with my son, and then I came back to the OK because it’s such a competitive fleet and lots of good guys are here.”

He is also enjoying Bandol. “Bandol is such a fantastic place. It’s great to walk on the beach in the morning and then waiting to come out sailing is really fantastic. It’s a really good atmosphere.”

Today, “The wind was shifting quite a bit and also coming up and down so there was a lot to work with, but a good day on the beach.”

Three races are scheduled on Friday from 11.00 with stronger wind forecast for the next few days. Racing concludes on Saturday. 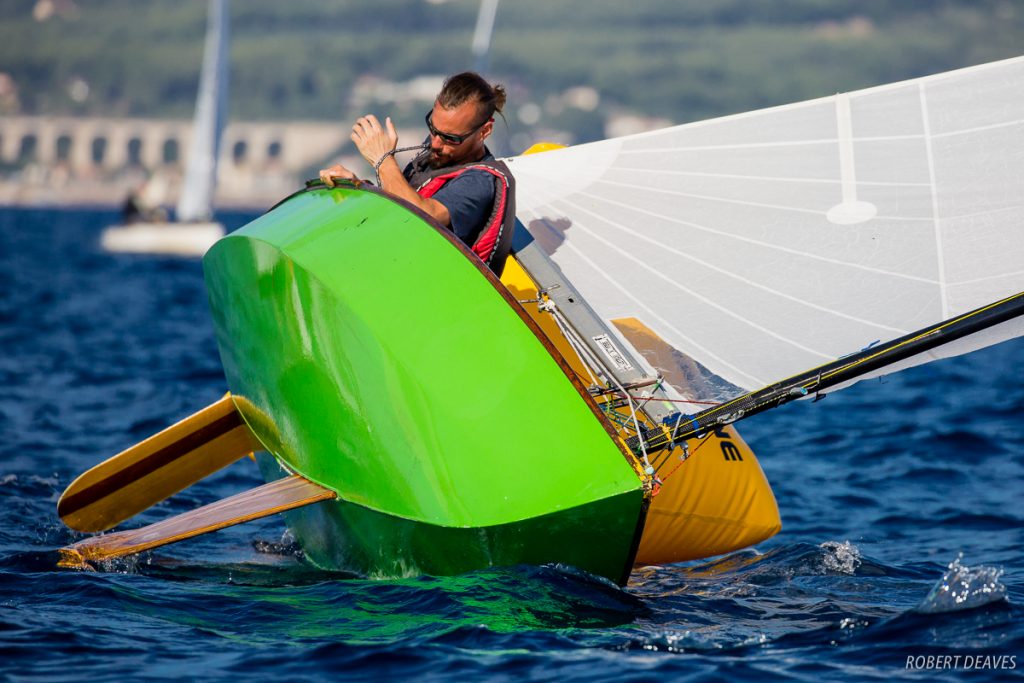